Between 1867 and 2007, Sanborn Fire Insurance Maps (Sanborn maps) were created for about 12,000 U.S. towns and cities for assessing fire insurance liability. Initially developed by Daniel Alfred Sanborn, a civil engineer and surveyor, each map is a large-scale lithographed street plan created at a scale of 50 feet to one inch (1:600) on a 21 × 25-inch sheet of paper. The maps were published in volumes, bound, and then updated until the subsequent volume was produced.

The map volumes are organized as follows:
1) a decorative title page;
2) an index of streets and addresses;
3) a 'specials' index with the names of churches, schools, businesses etc.;
4) a master index indicating the entirety of the mapped area and the sheet numbers for each large-scale map (usually depicting four to six blocks); and
5) general information such as population, economy, and prevailing wind direction.

The maps include outlines of each building and large outbuilding (outhouses typically are not shown); the locations of windows and doors; street names; street and sidewalk widths; property boundaries; fire walls; natural (e.g., rivers) and man-made (e.g., mines) features; railroad corridors; building use (sometimes even particular room uses); house and block number; building materials used for framing, flooring, and roofing; the strength of the local fire department; the locations of sprinkler systems, fire hydrants, and water, sewer, and gas lines and mains; and names of most public buildings. The maps were originally created for insurance assessment. Insurance companies used them to determine the liability of a particular building based on the map's information (e.g., building materials, proximity to other buildings and fire departments, and locations of water, sewer, and gas lines). Oftentimes an insurance company decided how much, if any, insurance to offer a customer based solely on a Sanborn map. Sanborn maps were created for the core area of Old Town Lafayette (sometimes spelled La Fayette) for three different years: 1900, 1908, and 1937. The 1900 and 1908 Maps are linked to below. See if you can locate your own house and/or outbuilding on one or more maps, and identify any changes in the building(s)' footprints over time! 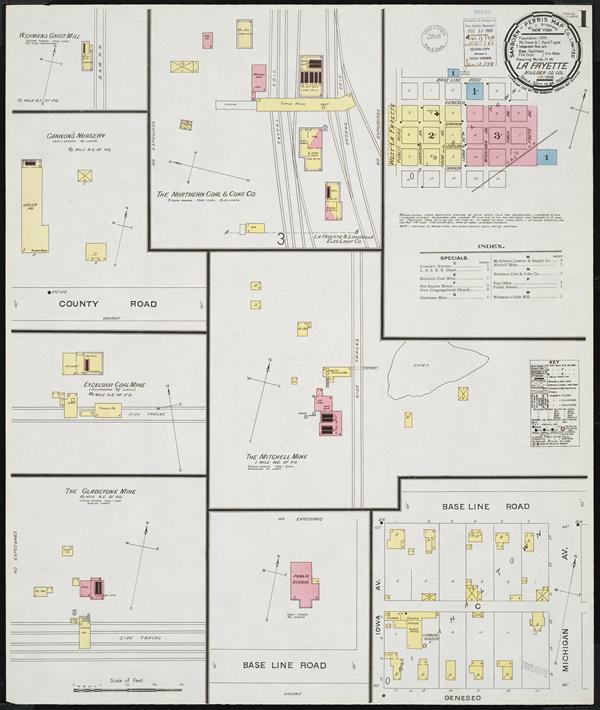