The proposal is to rezone the .28 acre portion of the 8.34 acre property from R-2 to OTR with Preliminary Plan/PUD applications to develop a subdivision with 26 proposed lots, two of which already have houses on them. Of the remaining 25 lots, the fifteen lots facing Cannon Trail would be duplexes. The 9 lots west of S. Foote would be single-family. The 3 lots facing E. Cleveland would have the possibility of an accessory dwelling unit. A .45 acre detention pond would be located adjacent to S. Burlington. While a .2 acre park would be located in the center of the property. The proposed gross density of the subdivision as a whole is 4.9 dwelling units per acre. Excluding the 2.2 acre parcel which is anticipated to be developed further in the future, increases the gross density on the developing portion of the site to 6.36 acres. The R2 zone allows up to 10 du/acre.

A public hearing for the Final Plan/PUD was held at the June 5, 2018 City Council meeting and approved.

This project is approved and is in progress. 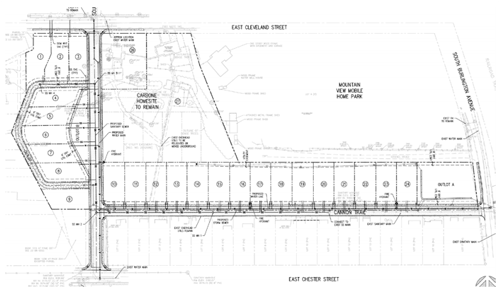