Lafayette's current Comprehensive Plan was originally developed in 1987, updated in 1997, and went through a major review and update in 2003. Beginning in March 2019, the City will be starting the process to develop a new, contemporary Comprehensive Plan. 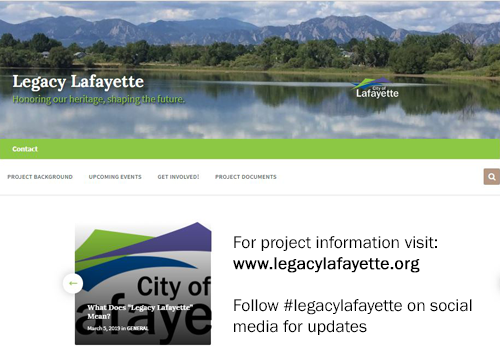 Community Advisory Committee (CAC)
In addition to Lafayette residents' input throughout the Comprehensive Plan process, a Community Advisory Committee was formed to provide guidance to the overall process. The members of the CAC will play an important role in supporting the completion of the new Comprehensive Plan for the City of Lafayette. This role includes:

View a list of the members of the Community Advisory Committee

The 2013 Technical Update to the 2003 Lafayette Comprehensive Plan is a series of documents setting forth goals and policies for the future of Lafayette. The plan is a statement of how the community views itself, what the city envisions for the community's future, and the actions the city will undertake to implement the vision and goals of the community.

The heart of the Comprehensive Plan is the Goals and Policies section and the Land Use Map. The updated Goals and Policies are a result of comments from City boards, commissions and committees as well as City departments and several workshops with the Planning Commission. City Council also held a workshop in May 2013. The Planning Commission held an open house with the public in July 2013 and two public hearings. The City Council held a public hearing in March of 2014 before adopting the 2013 Technical Update.

The plan is advisory only and was prepared with the general purposes of guiding and coordinating a harmonious development of the city and its environs which, in accordance with present and future needs, best promotes health, safety, order, convenience, prosperity, and general welfare.

The purpose of this plan is to state the preferences and priorities of the Lafayette community and to serve as a guide for current and future public decisions, especially the distribution and intensity of development, the location of future land uses including public facilities and open spaces, and requested zoning changes.