Art on the Street Awards for Sculptors

Every year three awards are presented to Art on the Street sculptors. 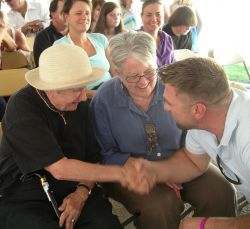 Jean Mellblom lived in Lafayette for nearly 10 years in the 1990s. She brought the concept of publicly funded art to town. Jean was a persistent, feisty, and very friendly person –all qualities which helped her convince City officials that public art was necessary in Lafayette.

Jean started her campaign at the same time the new library building was being designed. She saw a large, eventually windowless wall on Baseline Rd. as a potential canvas.

After developing an idea for the Mary Miller Mural with a local artist, she spent several years raising funds for the project. She asked for donations, convinced City Council to contribute matching money, and organized a program of selling mural tiles to donors. The mural project was completed in 1998, and Jean raised so much enthusiasm for outdoor art that City Council approved a public art fee for new developments.

Many people have been involved since then, but it all started with Jean and a vision she had for Lafayette. Because of her dedication and vision and to honor her memory, each year a piece in Art on the Street is selected for the “Jean Mellblom Award."

Jean Mellblom passed away in January of 2013. The Lafayette Public Art Committee would like to acknowledge that one of Jean Mellblom’s enduring legacies is the role she played in establishing Lafayette’s public art program. With the help of the Jean Mellblom Memorial fund, Jean’s family purchased The Strollers, a sculpture installed in Old Town Lafayette, as a way to honor her memory.